Anton Vrede was born in Willemstad, Curacao in 1953, moved to the Netherlands in 1961, and spent his secondary school years in Leiden. From 1971 to 1977 he studied at the Willem de Kooning Academie in Rotterdam, together with contemporaries including Frank Dam, Jos Looise and Willem van Veldhuizen. His work consists of drawings, bronze figurines, graphic art, paintings, sketches, screenprints and illustrations, and forms part of collections held by banks, funds, ministries and hospitals, among others. He himself describes his work as an “osmosis between abstract-expressionist and romantic figurative”. Anton Vrede endeavours to appropriate reality. However, the figuration must remain visible. The use of primarily light and vivid tints reflects his Caribbean origins. His work often includes animals; pink elephants float past, parrots and hornbills stand back to back with raised beaks, cats and tigers prowl around.

The animals, people and objects of Anton Vrede almost never represent the content they usually possess. The human can reflect the animal, and the beast can display human characteristics. The animals often serve as examples for a better way of life than that which people have. They fulfil a role and often have a function as personification of human feelings. Animal can portray strength, protection or deterrence. The obviousness with which meanings are exchanged is strengthened even more by mutually overlapping colour fields and inextricably interwoven lines. This way of working typifies the signature of Anton Vrede. Anton Vrede draws a great deal according to nature. His time studying in Blijdorp sharpened his hand, and the forms therefore appear to occur with playful ease. But, much more than the animal world, Vrede emulates “the world of the museum”. He principally loves the “rough” work of painters such as Penck, Basquiat and Guston. Along with museums of art, ethnological museums also form a source of inspiration for Vrede. For example, he also has great admiration for the art of the Asmat, a Papua people from Irian Jaya. The art of this people also features a great many animals, as bearers of a wide range of meanings. The animals in the work of Vrede tempt and impress, are cuddly yet frightful. Vrede: Extreme beauty, that is true beauty. Something that looks immaculate does not interest me. What does is something that is slightly damaged, which also evokes fear in you, like life itself.” For Anton Vrede, the animal world is a familiar world. A large proportion of his drawings, paintings, etchings and sculptures take place in this world. For him it is a dream world, a refuge, the parameters of which are formed by the primal symbolism which occurs in fairy stories, myths, fables and legends. He gives his animals plenty of space in this. They appear to be realistically represented, on the face of it, but they display a wide range of surrealistic characteristics in their actions and appearance. Furthermore, Anton Vrede has a visual language which is open, poetic and vulnerable, so that his figures can never be interpreted unambiguously. They are open to broader interpretation, thereby surpassing the cartoon figures as we know them from the drawing factories of Walt Disney and others (although Vrede will be the first to admit that comics and cartoons have influenced his work). Literature: Books by, or which include work by, Anton Vrede are: Van erf tot skai : een bundel gedichten, by Chitra Gajadin and Anton Vrede (illustrations), Futile Rotterdam, 1977. Schetsboek 1986-1987, publisher Bébert Rotterdam, 1987 and Anton Vrede : aap, haas, pinguïn, olifant …

The modern bestiary of Anton Vrede

The animal paintings and prints of Anton Vrede are light, fun and colourful. They barely tell a story, but they challenge you to think up your own story for them. That is fun at home. And this is an important aspect, because the home environment is a more important domain for visual art than museums, for example, where paintings are collected as if they were postage stamps. Just like animals: nicer in the wild than in a zoo.

Anton is a professional, who is inspired in his use of colour by pop art. Naturally, his earlier pieces were somewhat wilder than his current ones. But he still presents beautiful colour combinations, roughly presented but still very recognisable animals, who are often somewhat defiant, like a naughty child looking at the viewers. And given the situation in which Anton places them, there is good reason for this.

Take the painting accompanying this piece, for example. Concentrated pop art, I’d say. An ape, painted with extremely smooth lines, looks at you triumphantly, while lying on the trunk of an elephant. And the elephant is gazing contentedly into the distance. If you look carefully at the canvas, you can see the vague contours of earlier animals and presentations. The colours are exceptional and compelling, and – despite

all these elements – the piece is hard and soft at the same time. A dream in reality, or reality in a dream. I immediately fell in love with this painting at an exhibition in Rhoon.

Anton has produced a whole series of such paintings, along with graphic art. But, inasmuch as I’ve seen the whole series, I think this painting is one of the most balanced, and nevertheless still exciting.

Anton has produced a lot of work. I only know part of it, but I get the impression that there are a lot of constants in his animal paintings. Combinations of animals which, based on an otherwise incorrect anthropomorphic approach, have been given human characteristics which they do not have. It is a question of projection. You see what you want to see. Animals appeal to our feelings of pettability, genuineness and cruelty, and have therefore for centuries been presented in fables as pseudo-people. And then primarily as a puppet show attraction, for the education and entertainment of the people who are taught a lesson in this way. A prime example of this are the highly moralistic fables of La Fontaine. Useful in their time, but now outdated.

Anton Vrede indisputably has something with animals, and primarily with his own bestiary. But he does not belong in the tradition of fable tellers. On the contrary. His animals are impressions of animals. Not photographic representations, but creatures which you would expect in pop art. Sublimated reality – which fascinates. With essential lines and unexpected colours, the animals of Anton get you thinking. And in this respect he is more an abstract painter than a figurative one.

It’s all in the mind of the viewer, and the question is whether the associations which all these jolly, vague animals evoke were also placed there by the artist. Whatever the case, the bestiary of Anton Vrede is about something. His work has a soul, and it is therefore extremely worthwhile. .

Hein Meijers
Science journalist and the lucky owner of a number of works by Anton Vrede. 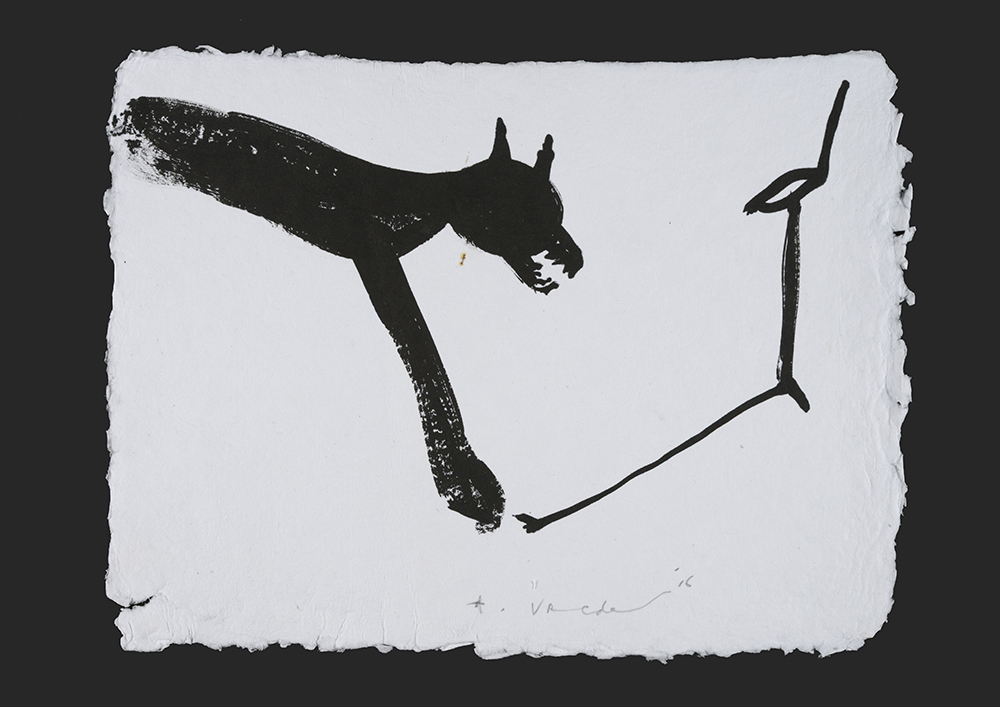 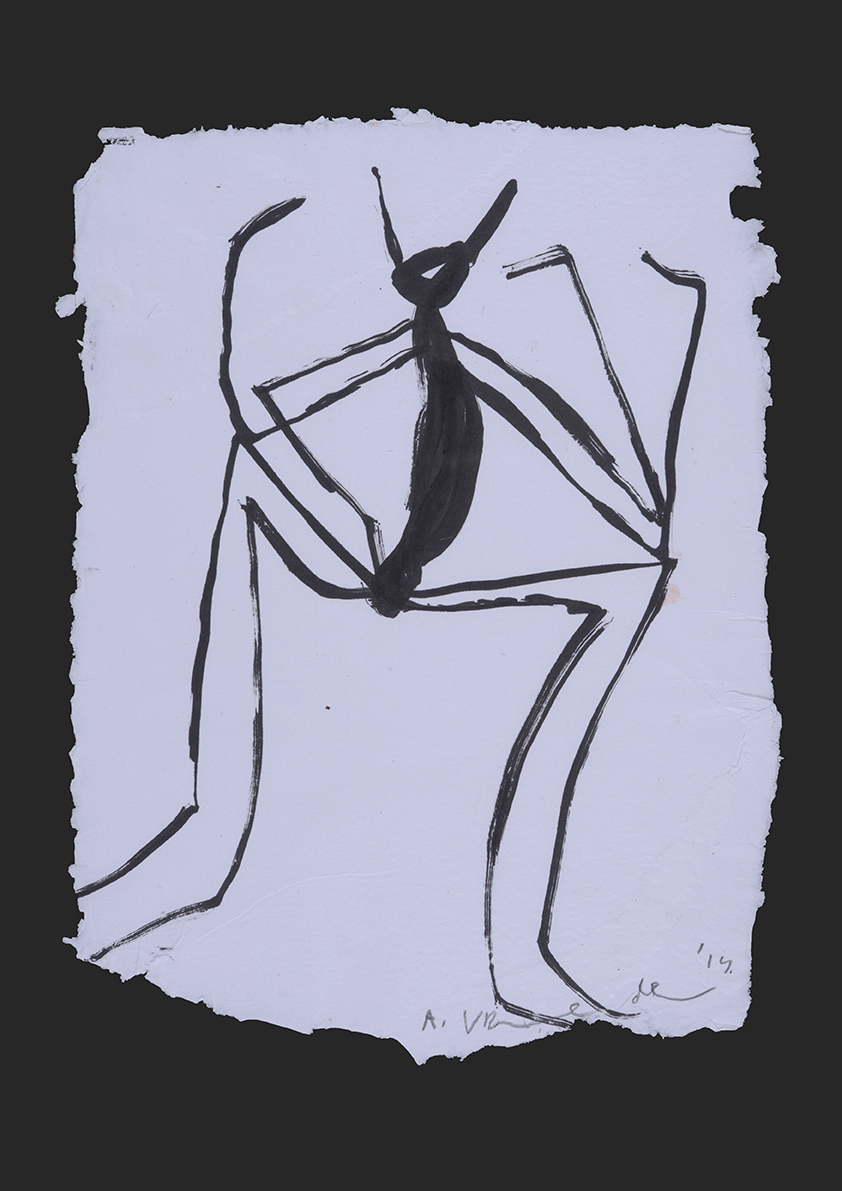